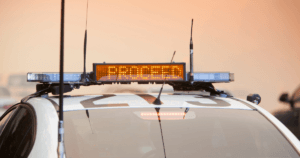 Police charged KPP with negligent driving occasioning grievous bodily harm after an motor vehicle accident at an intersection. The police case was that KPP drove to an intersection where she was turning right. However, the sun blinded her and then, after stopping, she turned into the path of an oncoming motor vehicle. The resulting collision caused a passenger in the oncoming motor vehicle to suffer several injuries. These included a broken left clavicle, ligament damage on both ankles, whiplash and general bruising.

KPP argued that a car collided with her from behind forcing her into the path of the oncoming vehicle. Thereby causing the crash. KPP argued that her driving was not negligent and that she could not possibly avoid the collision given the impact from the car behind her.

The Court determined that KPP was not guilty of negligent driving occasioning grievous bodily harm. Her explanation to police at the scene and in Court was consistent with her innocence in relation to the charge. The prosecution could not establish that the collision was a result of KPP’s negligence.

It was open for the Court to conclude that the collision had been caused by the car which collided with the rear of KPP’s car. This forced KPP’s car into the path of the oncoming vehicle thus causing the injuries to the passenger in the other car.

Subsequently, KPP was successful in a cost application against the police who ought not to have instituted proceedings against KPP.  The circumstances were that she provided her account to police at an early stage. They failed to properly investigate her claims to police at the outset.

If you have had a traffic accident and are facing criminal charges, contact us. Our lawyers are expert in traffic law and criminal defence.