The NSW Government recently approved amendments to current defamation laws. The new laws will change how the practice of defamation operates. While the new bill is yet to be enacted into legislation, it’s important to be aware of the changes coming. 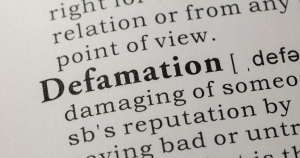 Defamation occurs when someone publishes material which is harmful to the reputation of another person. ‘Publishing’ can include spoken or written material. It doesn’t matter how the matter is published, but it must be read by a third party. Australia enacted Uniform Defamation Laws in 2006, which means that while each state has slight variations on the laws, they are mostly the same.

Most people think of defamation as solely applying between celebrities and big media giants. However, this is not the case. A report by the University of Technology Sydney in 2018 highlighted the breakdown of those who use defamation law.

Research confirms that it is becoming more common for private individuals to be plaintiffs in defamation actions. Between 2013-17 only 21% of plaintiffs were public figures. Only 25.9% of defendants were media companies.

Defamation is also becoming more digital-based, leading to some of the changes made by this bill. Between 2013-2017, 51.3% of defamation matters were digital cases. This would include defamation on social media as well as online news platforms.

Defamation cases are most often settled behind closed doors with an apology issued. Going to Court can be costly and most people try to avoid this. In the 5-year period, there were only 87 cases which went to a full trial with judgement and damages awarded. Thirty-eight of those plaintiffs received a payout of $100,000 or more.

The NSW Government was the first state to pass amendments to the Uniform Defamation Law after the Coalition of Attorneys General (COAG) approved the amendments on 27 July 2020.

In summary, the key changes to the act include:

NSW Attorney-General Mark Speakman said the changes will represent the new generation of Internet defamation. “Social media has resulted in an explosion of minor cases over minor personal slights, clogging courts with costly litigation out of all proportion to the actual complaint,” he told the Financial Review.

A number of agencies and persons with interests in these amendments made submissions to the COAG in relation to the changes. From plaintiffs, Barristers and working groups to Facebook and Google, a number of submissions were taken in before the amendments were finalised.

But what do these reforms mean and how will they affect defamation law in practice?

The single publication rule will introduce an amended limitation period on defamation claims. Under the current legislation, there was a limitation period of one year from the date of publication – however for internet-based defamation, the one-year limit was on the date of download. This meant that in theory, a person could sue for internet-based defamation decades after it was published as long as they could prove it had been downloaded by a third party within the last 12 months.

The new legislation will state that the one-year limitation period will apply to the date of first publication, or when the material was uploaded for access. The courts will remain to have a discretion to extend the limitation to three years if it was not reasonable for the plaintiff to have commenced the action within the year.

Submissions from Facebook supported the move to the single publication rule as a “reform fit for the digital age”.

TAKEAWAY: If you have been defamed, seek legal advice from our Senior Defamation Solicitor as soon as you are made aware of the publication – do not delay.

The new legislation has created a public interest defence. The new section is modelled on section 4 of the UK Defamation Act 2013. The legislation provides a non-exhaustive list of factors to consider and the jury is to determine whether the defence has been met.

In its submission to the COAG, The Press Council of Australia stated that it supports the defence in principle so long as it “does not place unreasonable limits on freedom of expression.” The Press Council also pushed for the defence to be modelled on the UK laws, not the NZ laws, which COAG ultimately agreed with.

Under defamation, you don’t have to prove damages in order to be entitled to compensation. The act of defaming someone itself gives rise to damages. If someone filed a claim for defamation, the defendant can claim triviality as a defence. The defence of triviality occurs when the defendant can prove that the circumstances of publication were such that the plaintiff was unlikely to sustain any harm.

The new legislation removes this defence and instead places a requirement of ‘serious harm’ to be proven by the plaintiff. Modelled on the UK Defamation Act, the plaintiff has to prove that the publication of the defamatory matter has caused, or is likely to cause, serious harm to the reputation of the plaintiff. In relation to corporations, this would be a serious financial loss. In their submissions, Google stated that it did not support the abolition of the defence of triviality and claims the two would operate differently.

In practice, judicial officers will be the people to determine whether the element is established. This can be assessed before trial or during the trial by motion of the officer or the application of both parties.

A former client of O’Brien Criminal & Civil Solicitors, Esther Rockett, made submissions to the COAG. Ms Rockett emphasised concern for the practical way that the serious harm threshold will be used. Facebook also made recommendations that guidance is submitted on what constitutes serious harm under the new laws. She had been sued for defamation by Serge Benhayon over publication on her blog.

New requirements include that the concerns notice must contain:

If the defendant requests further particulars, then they have an extra 15 days to make amends, on top of the existing 28 days.

In relation to an offer to make amends, the offer must be open for at least 28 days. Redress of harm in the offer is not mandatory but may include removal of publication.

If a ‘reasonable’ offer of amends is made and the plaintiff does not accept the offer, then the defendant will have a defence under the new amendments. ‘Reasonable’ in this context includes whether the defendant made the offer as soon as practicable and whether they were ready and willing to carry out the offer. The defence is to be determined by the judicial officer, not the jury.

Barrister Senior Counsel Tom Molomby notes the radical nature of this procedure. “There is nothing like it in any other area of the law,” he stated in his submissions.

Most of the reforms balance around notions that the court will have to interpret. The exact implications of each amendment will only be seen once the Court has determined the meanings however we believe that the implications are likely to severely affect the world of defamation.

If you have been defamed, or you have received a concerns notice, contact O’Brien Criminal and Civil Solicitors for a free initial assessment with our Senior Defamation Solicitor. You can contact us on 02 9261 4281 or .